Finally my video shop and I got our acts together and I have watched Season Four of Angel. It’s really crap. There are some good things, but generally it’s dark and broody and boring. I never bought the Angel/Cordellia love story. It always felt forced and dumb. I’m over the Fred/Gun/Welsey love triangle. I want more of   and his delightful nightclub-ness. I hate Connor with his emo fringe and attempts to out-brood his father.

I think there was not enough humour and too much fear of the end of the world. And yet another unexplained demon pregnancy? Yawn. Of course, I watched the whole thing. I mean, why stop watching it just because I’m not enjoying it? Duh. I think it’s major FOMO. Fear of missing out, that is. It’s why I can rarely stop reading a book that I’ve started or walk out of a movie.

Having said that, when I returned the DVDs, I picked up the final season. Possibly a bit of FOMO, but more likely because I have seen a couple of these eps back when it was on TV and Spike’s back. I love Spike. It’s bound to be better… I hope.

I’ve been a bit crap at actually getting my posts from my computer onto the online world as of late, and in the meantime, I’ve finished Season Five. I think that’s it – five seasons. The last scene is kind of cool, although I got fed up with the whole Fred possessed storyline. It almost felt like the last five or six episodes suddenly had to wrap up lots of stuff and close the whole thing down, and it did it in a pretty clunky way.

I missed Cordellia. That was a surprise. Not that she is dead or anything, but she’s only around for, I think, one episode. It was marvellous having Spike back, and the flashbacks to the past he and Angel shared were good fun. There were two episodes ‘featuring’ Buffy – that is, she was referred to and glimpsed at from afar, but it was very bloody obvious that it was just a stand in, and that Sarah Michelle Gellar was nowhere in the house. Why did they bother? At least we got a last goodbye of Willow. That was nice.

Some of it was really surprisingly dark – like when Spike’s hands got chopped off. It felt more like Dexter than Angel, and I kind of liked it, but I wasn’t expecting it. Overall, I did like season five better than season four, but I think I lost the love I had for it at the very start, and it never measured up to Buffy. I’m going to miss Lorne, though. He was ace. Plus I got to see this episode. 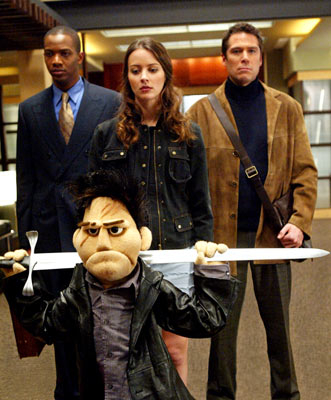 And if that picture doesn’t give you enough of an idea on what’s going on, check this one out. 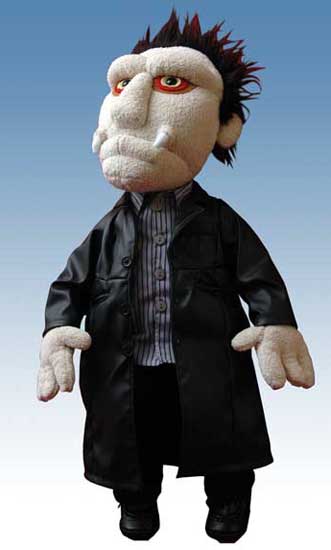 Teehee. And some final broodingness. 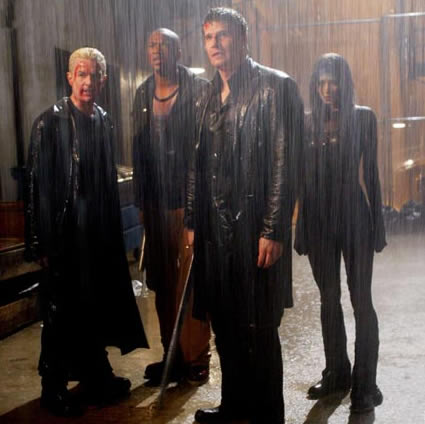