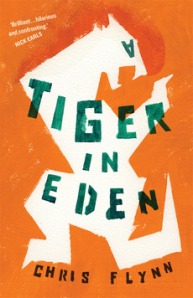 There’s a Northern Ireland Loyalist who has had to flee Ireland for his crimes, and so he spends his time on the beaches of South East Asia drinking, screwing tourists and passing time. Despite his flaws, Billy comes across as a fairly likable character; or, if not likable, there is a sense that he deserves to conquer his past and have a decent life.

I didn’t like this book as I read it. Whilst I quite liked reading about the character of Billy, I got sick of the constant meaningless sex. So much so that when he reached his turning point, I didn’t really care if he made it or not. And then I saw Chris Flynn at the MWF, and I really liked what he had to say. In addition to this, Chris did a reading, and it was much better to hear the Northern Irish accent spoken that trying to get a strong sense of it in my mind. I must remember to look out for this as an audio book – if it is read well, I think I would prefer it.