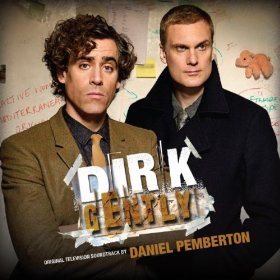 Ah, Douglas Adams. Most people remember him fondly for Hitchhiker’s Guide to the Galaxy – indeed, I was obsessed with the original BBC TV adaptation as a child, and loved the books when I was older. Then, along came Dirk Gently – Holistic Detective. Two books – Dirk Gently’s Holistic Detective Agency and The Long Dark Tea-time of the Soul. When I heard that these had been adapted into a television series, I was very excited. Then to hear it would feature Stephen Mangan as Dirk Gently, I was even more excited. I thought he was fabulous in Green Wing, a series I really must watch again.

The pilot episode was pretty good. There was all of the insanity I remember from the books somehow wrapping up into a solution. However, the rest of the season didn’t work so well for me. The mysteries were interesting and a bit nuts, but I don’t remember Dirk Gently being as condescending and nasty in the books as he appears in the television show. In addition to this, there is an over-lying story of the character of Richard MacDuff as Gently’s sidekick/partner. In the final episode, MacDuff stands up to Gently, but I felt that there was no real justification to him having stayed with Gently for the previous episodes, or for him to suddenly stand up to him.

It’s a shame. I loved the books and had high hopes for the television show, but was very disappointed. Now, I want to read the books again, but I am concerned that I may have lost the love. Is it worth revisiting a loved book in the fear that it is not all you remember?