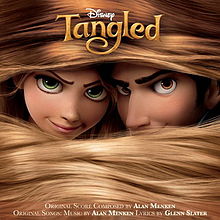 It’s a Disney film of Rapunzel with a lot of singing. It’s clearly for kids, although I know a lot of adults who grew up with Disney and probably totally love it. I didn’t grow up with Disney, but I still thought it was okay.

The story goes as follows: when the queen was pregnant with Rapunzel, she was very sick. In the forest was a magical flower that could fix anything, which an evil witch used to keep herself young and beautiful. The flower is found and fed to the queen who promptly recovers and gives birth to a beautiful girl, and the magic of the flower remains in the baby’s hair. The witch steals the baby and keeps her in a tower, refusing to let her out. Just before Rapunzel’s eighteenth birthday, a thief ends up finding her and she bribes him into taking her to see the lanterns that the king and queen let fly in memory of their missing daughter.

Phew. That’s just the start. There’s a lot of good humour in the film, not the least the one great song in the film, which is where all the roughest men of the forest reveal their dreams. There’s a good animal character, the horse. It’s fun. It’s not making me rush off to see more Disney films, but it is good fun.

Tangled was nominated for an Oscar for Best Acheivement in Music Written for Motion Pictures, Original song for “See The Light”.