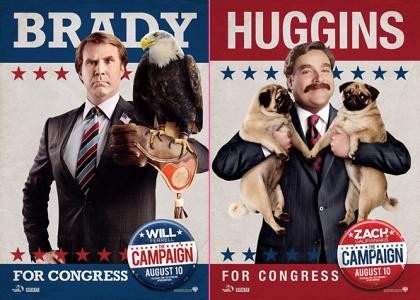 Cam Brady (Will Ferrell) has held a position as congressman in North Carolina for years, and is again running unopposed. But he continues to make major political gaffes, and uses spin to get around it. The Motch brothers (John Lithgow and Dan Akroyd), who are the faceless men behind politics, need to get someone more respectable in office to ensure their illegal Chinese labor plans get through congress. They find the most unlikely candidate, Marty Huggins (Zach Galifianakis), an eccentric director of a small town tourist centre.

There’s a lot to love in this film. Seeing Will Ferrell punch a baby was definitely a highlight – horrifically detailed slow-motion CGI that is oh-so-wrong, but just worked. Plus, whilst Galifianakis plays an eccentric, the portrayal doesn’t seem to have that cruel edge that a lot of comedy has had over the last few years.

Whilst I enjoyed the film, I felt it didn’t stay strong for the full 85 minutes. The story just seemed to drop off by the end. Good for a laugh, sure, and a lot funnier than I had expected, but not totally grouse.