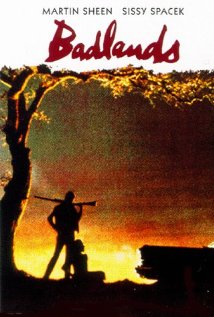 Sissy Spacek plays Holly, a fifteen-year-old in 1958 whose mother has died and her father has moved her to South Dakota to get away from the sad memories. There, she meets Kit, Martin Sheen, who is ten years older than her and is a juvenile delinquent. He takes a shine to her and they begin spending time together. When her father finds out and tries to keep them apart, Kit shoots him dead, and the couple go on the run.

The film is frustrating in many ways. Both of the main characters are immature, and annoying. When hiding out in a rich man’s house, Kit spends time spouting wisdom into a dictaphone. It’s ridiculous that he can feel he has this wisdom to share, but it says so much about the character. Arrogant, but immature. Then there’s Holly. She commentates the film, and is coldly detached from all that goes on around her. Perhaps it is the shock of her mother’s death, or a lack of self-esteem; whatever, she is a fascinating character to watch.

Recently, director Terrence Malick directed Tree of Life, a film which I am still unsure if I like or respect. Badlands has much of the beautiful cinematography of Tree of Life, along with the feel of 1950s small town America. But Badlands definitely wins out for me because it has a story and character and, well, a point.