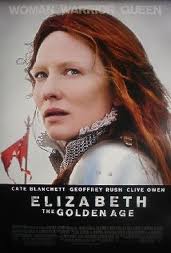 In Elizabeth, we saw Cate Blanchett play Elizabeth I as she came to the throne and had to battle with those who wanted to take the crown from her. In this sequel, Elizabeth has transformed herself into Elizabeth the Virgin Queen and is leading her people, still avoiding the question of marriage, still battling those who want to take her throne, and still battling her own emotional attraction, this time to Sir Walter Raleigh.

It was made nine years after the first film, which means we can avoid unnecessary aging make-up for the cast. I didn’t enjoy this as much as the previous film. I felt that some of the emotion that Elizabeth struggled with seemed more suited to the younger, more naïve Elizabeth. Perhaps this was an attempt to give the queen a human side, but I felt that it brought little to the character for me. Again, as with the first, I am not sure on the historical accuracy of this film. It is a fascinating time, but I can’t help suspecting that in dramatizing the story for film, that it is entirely possible that the story has been modified in many ways. I would be very interested in watching it again after reading about Elizabeth, or perhaps seeing an interesting and informative documentary. Any suggestions?