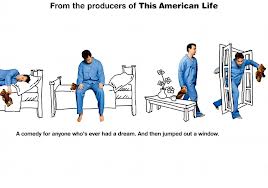 If I haven’t mentioned it before, I love listening to podcasts. One of my favourites is This American Life, on which I heard the story that Mike Birbiglia told at The Moth. The Moth is a group based in New York where people get up on stage and tell true stories without notes. It is also a fabulous podcast. The story that Birbiglia told was of his sleep disorder, where he gets up during the night to enact his dreams. It’s hilarious, with just the right amount of tragedy to be fantastic.

Ira Glass, the producer of This American Life, worked with Birbiglia to produced Sleepwalk With Me, the film version of the story. There’s a lot more in the story; a lot more background of his relationship with his girlfriend and a lot more on the start of Birbiglia’s comedy career.

The story is so great that it makes for an entertaining film. Although, what it really felt like was an extended episode of an amusing television show. That would be great, Birbiglia. Get a TV show. I’d love that. As for a feature, I’m not sure whether it is just because I’ve listened to the story several times, but it didn’t hold my attention the whole way through. I’d recommend not listening to the podcasts of the story and just enjoying the film or vice versa.