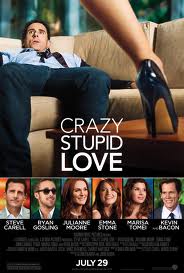 Cal Weaver (Steve Carell) is devastated when his wife, Emily (Julianne Moore) asks him for a divorce, seemingly out of the blue. He moves in a nondescript apartment and spends his nights sitting alone at a local bar moaning about David Lindhagen (Kevin Bacon), the man his wife slept with. Ladies man Jacob Palmer (Ryan Gosling) takes pity on him and helps him to reinvent himself, but all Cal wants is his wife and family back. Meanwhile, Jacob meets a woman that makes him question his life choices, Cal’s son is in love with his babysitter, and the babysitter is in love with Cal. It’s a complex series of plots, and that hasn’t even gone into half of it.

I make no apologies of my love of the performing of so many members of this cast; Steve Carell, Julianne Moore, Ryan Gosling, Kevin Bacon; even Marisa Tomei has a hilarious role. Plus, the film is so well-structured that I did not pick the twist and I thought it was a doozy. It’s not an easy film to watch; there are elements that are like an emotional car crash, but it’s just wonderful.