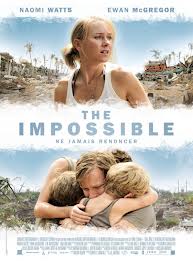 The Impossible is based on the true story of a Spanish family who were holidaying in Thailand when the Boxing Day tsunami of 2004 hit. There was no warning, just a sudden wall of water that destroyed everything in its wake. Hundreds and thousands of people were killed and displaced, and those who survived were often on their own, separated from friends and family and unable to contact their families back home.

The film feels so true. It is emotionally traumatic, but also horrific; the images of the devastation and disaster, the physical pain, the desperation. I cried the whole way through, really feeling the emotions as the characters on-screen felt them.  It feels like it has been a long time since I’ve seen Ewan McGregor at his best – and this is him at his best. The pain of the father searching desperately searching for his wife and son, it hurt. Naomi Watts was amazing as a woman in extreme pain still trying to keep herself going for her son. And Tom Holland was marvellous as the oldest son, Lucas.