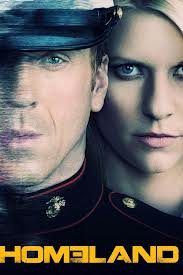 After being missing in Iraq, Marine Sergeant Nicholas Brody (Damian Lewis) is discovered and returned to the US. Not only does he need to deal with the trauma of years of imprisonment and torture, but he needs to figure out how to fit in with his family after such a long departure, as well as trying to prove to Carrie Mathison (Claire Danes) and Saul Berenson (Mandy Patinkin) of the CIA that he has not been turned to work for the terrorists.

Homeland took the world by storm a couple of years ago, and the second season was one of the series that were fast-tracked from US broadcast to Aussie screens last year in an attempt to avoid illegal downloads. (More of this, please, Aussie networks. Thanks) The major criticism I have heard from those who don’t love it is that the character of Carrie is unbelievable; she take medication for manic depression (I believe – I can’t quite recall if that is the condition, and couldn’t find confirmation in a brief online search), is extremely intense and, at times, quite manic, and I have heard it mused that such a personality surely would not have the power that she seems to have within the CIA. I can see where they are coming from, but it seems that she has had quite a lot of success in her career, and is a strong and intelligent woman.

I found the series to be extremely well-crafted and interesting. The characters were good, and the structure did keep you guessing – having the first series with the hero character of Brody as a possible terrorist was very clever and engaging. For me, I watched it, but only really loved it in the last episode of the first season. I found a lot of the sub-plots of the second season annoying – especially the character of Brody’s daughter and Brody’s wife. I just didn’t care about either of them. And then, again, the last episode of the second season blew me away. It’s not The Wire, or The Sopranos, or any of the HBO or Showtime series that I have loved. But it is definite a-grade television drama.

Homeland is based on the Israeli series Hatufilm (Prisoners of War) which is currently screening on SBS, but it is really only loosely based on this. It is a very different series, far darker.