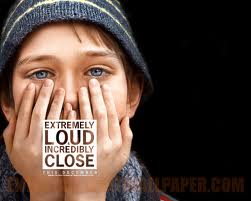 This review originally appeared on www.melbournegeek.com in March 2012.

Jonathan Safran Foer is one of my favourite authors. His two fictions Everything is Illuminated and Extremely Loud and Incredibly Close are two of my favourite ever books. I love the humour and absurdity and heart of his writing. At the cinema recently, I saw the trailer for Extremely Loud and Incredibly Close  and my heart sank. It looked awful. The problem is the marketing.

This is not a film about September 11.

But this is how it is being marketed, and I think that’s really wrong. Yes, (spoiler alert) the father died in one of the towers. This film is not about that – it’s about his son and how he deals (and cannot deal) with his grief. This is why I cried for two hours watching it.

At first, I was not happy with the choice of Thomas Horn as Oskar – he just wasn’t my Oskar, my little, nervous, weird, precocious Oskar. Plus he seems more like eleven or twelve than nine. As the film went on, he grew on me, and apart from a couple of overly schmaltzy, emotional moments, he was great. Especially the way he wields that tambourine! The casting of Tom Hanks and Sandra Bullock was a mistake, I reckon. I mean, they are both so recognisable that it is hard to see them as anything other than who they are, and I found it hard to separate that. Mind you, they both made me cry, so I guess they had their acting chops on.

I wonder if the reviewers who are hating this film have read the book.

I wonder if it is my absolute love of this book that has lead me to love the film – I don’t need to try to understand it. I’ve been through all the disbelief and incredulousness as I read (how can anyone let a nine-year-old wander around New York on his own like that?) and was able to just enjoy the ride. This is a clear example of when a trailer ruins a film; don’t watch the trailer. And when you see this film, take lots of tissues.