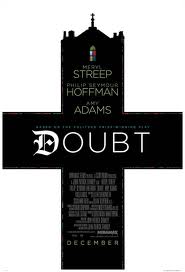 New York, 1964. Sister James (Amy Adams) is a young nun at a Catholic school which is ruled over by the tyrannical principal, Sister Beauvier (Meryl Streep). When Sister Beauvier suspects untoward behaviour from the priest Father Flynn (Phillip Seymour Hoffman), she will stop at nothing to ensure his demise.

It’s interesting to watching this film around the same time as watching Atonement. Atonement has a young girl who suspects the worst from a series of events leading to the ruination of several people’s lives. Doubt is almost the opposite, with another young (although a fair bit older) woman being led to certain conclusions by another.

Molestation by priests and other people in positions of authority keeps being revealed, as is the cover-up by some institutions. This film looks at the issue in a different way; if you suspected this behaviour but have no evidence, what can you do? Is it better to wait for evidence knowing that children may be suffering in the meantime? Or can you ruin a man’s reputation and career on the whisper of fact?

The film doesn’t attempt to arrive at an answer to this conundrum, but follows the three main characters as they find their own way through. It is a very, very good film; emotional without being hysterical, and it really leaves you questioning these huge issues. Then again, as is typical with the cover-up of the institution, it’s not as though the priest is ostracised or jailed for his suspected crime. Just moved on to another area. Ah, institutions like the church. How cross you make me.