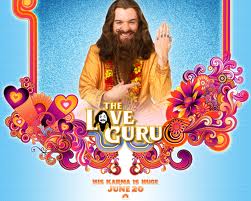 There have been a lot of films that have come from sketches from Saturday Night Live. This is where many great comic actors started; Steve Martin, Chevy Chase, Steve Bellushi and more recently, Tina Fey and Wil Ferrell. I’ve only seen the odd sketch, and from what I can tell, they are often hilarious, over-the-top parodies of characters in society. Sometimes, they translate very well to film. Think The Blues Brothers, or Wayne’s World. Then, there is something like The Love Guru.

Perhaps as a series of sketches on the show, it would have been funny. But as a film, it was forced and tedious, rarely funny and often bordering on racist. Bordering on? Often, downright racist.

Mike Myers plays Guru Pitka –  a cross between a guru and a self-help, motivational speaker. He desperately wants to get on Oprah and become the number one guru about Deepak Chopra. He is employed along with his sitar and elephant, to attempt to reunite a Canada ice hockey star with his wife, allowing the team to win the championship. And he falls in love with Jessica Alba.

The story is weak, the jokes are stupid and it doesn’t have any of the charm of previous Mike Myers work. So disappointing.