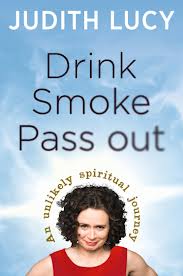 I was a massive Late Show fan back in the day. Not like the girl I once met who wagged school to take part in a crowd scene in a sketch, but I did love it. And I loved (and continue to love) Judith Lucy. I love her self-deprecating wit and every element of her negativity. I thoroughly enjoyed The Lucy Family Alphabet (which I must re-read). Last year, Judith Lucy had a show on the ABC called ‘Judith Lucy’s Spiritual Journey’ and I thought that it would be terrible. I really didn’t want to see a whole bunch of different faiths and beliefs, regardless of how kooky they were, being pulled to pieces and disrespected by a woman who I loved. And, thank goodness, I was extremely wrong. It was a very sensitive show that looked into these practices with humour, but without laughing at them. It was very impressive.

So, when this book came out, I felt I didn’t have any need to read it. I thought that it was going to be a retelling, perhaps in more detail, of the television show. It’s not. It’s a deeply personal memoir that covers life, love, booze, comedy and so much more. Judith Lucy has always been a role model as a strong woman despite the negative things she says about herself. The television show does get a few mentions throughout, and the last couple of chapters briefly run through the experiences she went through, but the book has so much more. Thanks, Judith. I raise my glass to you.