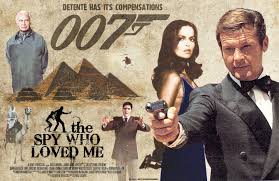 Oh no!  A nuclear submarine has been stolen. What to do? Send in Bond. Give him the chance to scuba a lot in his little shorts with beautiful women in bikinis. Things won’t go smoothly – oh no. But eventually, spoiler alert, Bond will beat the bad guy, shag the beautiful woman and the world will be safe again. Until next time.

For me, the best thing in this was Atlantis, the most spectacular of all super-villain bases (that I’ve seen so far). It’s way cool, emerges from the water in the most fascinating and awesome manner and what’s more, despite being an underwater hideaway, it has its own pool with killer sharks. Too good.

Is this better or worse than any of the old Bond films? I don’t know. I still love the kitsch, the style, the bad fights and the crappy special effects. It’s ace fun.