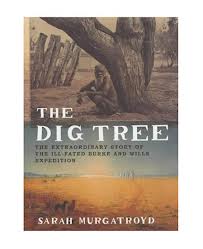 I generally don’t read non-fiction books. I’m not morally opposed to them or anything like that – it’s just that I tend to prefer novels. However, when my mother recommended The Dig Tree, I had to check it out.

For those who don’t know, Burke and Wills were a legendary pair of Australian explorers. They died whilst on an expedition to be the first to cross the country from the bottom to the top. At school, I was taught that they were heroes, and there are many statues and plaques to them across the nation. (There is a large statue outside Victoria’s State Library in Swanston St, Melbourne)

This is what I remembered. That at some point in the expedition, Burke, Wills and a couple of others branched out and went alone, leaving a group to wait a certain amount of time for them. Along the way, one of the small group died and Burke and Wills spent a day burying him. When they returned to the place they’d left the rest of the party, they’d missed them by hours. This is where Burke and Wills died.

What I didn’t know (or possibly didn’t remember) was that Burke was not an explorer prior to this expedition. He was a terrible leader who made awful choices that were detrimental to both himself and his group, and no doubt caused the men to die. The expedition was a total calamity. What makes this book so fascinating is the enormousness of the task that they and other explorers of the time undertook.

Sarah Murgatroyd has provided an excellent account of the expedition, told in a manner that I personally found extremely compelling. This is definitely a yarn worth hearing.