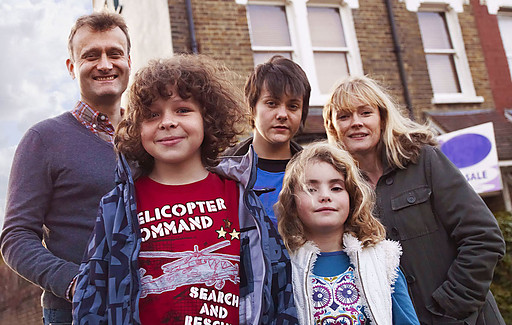 Outnumbered is fabulous. Filmed as a fly-on-the-wall type mockumentary about Pete (Hugh Dennis) and Sue (Claire Skinner) as they get through the day-to-day disasters of their young family. There’s Jake (Tyger Drew-Honey) who starts the show on his first day at secondary school and hits puberty as the show develops. Ben (Daniel Roche) a young compulsive liar with a lot of energy and a knack for causing problems. Karen (Ramona Marquez) is the youngest in the family who looks like an angel but asks the most tricky and often morbid questions. On top of this the parents are dealing with financial worries, Pete is having problems as a teacher at a particularly rough secondary school and Karen has a father developing dementia, a sister who flits in from overseas and is very little help and has a tricky job-share situation.

The show is just so funny. It’s real and tricky and, at times, quite awful, but hilarious. There was the scope for this to continue forever as the family deal with new issues as the children grow, but it is probably just as well it finished when it did. Although I would watch any future specials, without a doubt.