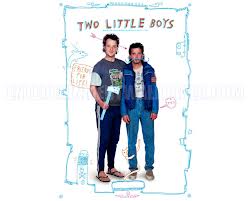 Nige (Brett McKenzie) has been mates with Deano (Hamish Blake) since primary school. They’ve done everything together for years, but now their relationship has changed. Nige has a job and has made a new friend, and Deano can’t stand it. Then Nige accidentally kills a backpacker and they are forced together to deal with this situation.

I really, really wanted to like this film. (Perhaps I need a new category of films – films I want to like but don’t. Ruby Sparks, now this, and I reckon there are a lot more) I was a bit late to Flight of the Conchords, but the HBO series is totally fabulous. And whilst I’m not a fan of commercial radio, thanks to the wonders of podcasts I regularly listen to Hamish and Andy and enjoy their work too. But this film is just terrible. The plot has a lot of potential, but the characters are just so annoying. What’s more, the film didn’t really seem to know what audience it was aiming for. It felt like it should have been at a younger audience, like perhaps a 12+ group, but then there were sex jokes and gross shots of the deceased that were more appropriate for an older audience. I could not force myself to like it, and I really did try.