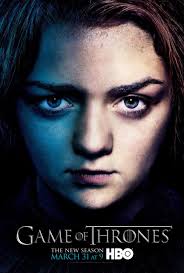 Season three is complete. Finally, after obtaining a copy, I am able to brave social media without the fear that a hilarious comment or meme is going to be a total spoiler alert and ruin the entire show for me. (On a side note, how long is acceptable for spoilers with pop culture? I threw that into google and one comment said 1-3 months. That seems ridiculous. It often takes me more than three months to know that something even exists) At any rate, I’m not going to spoil anything here.

What I will say is that I think both season two and season three follow smoothly from the first. I’ve not attempted the books (apart from the first), but have heard that the television series has some deviation from the specific detail of the book, but the general overallness is pretty close. Each storyline continues to take logical progressions. There are characters who we want to step up and who absolutely do, and suddenly, often unexpectedly, characters die. Or, more accurately, are killed.

For me, I think it is worth it. I’d like it if there was some way to have it structured with less slow slow slow slow and then sudden fast and exciting, then back to the slow slow slow slow. But, I suppose context is important, and it can’t only be sex and death. I reluctantly suppose.