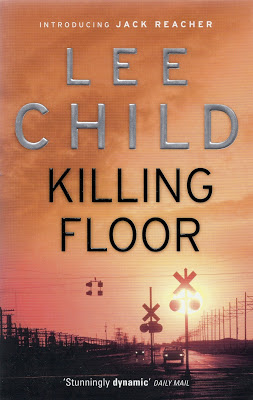 What better to move on to from Patricia Cornwell’s Scarpetta novels than Lee Child’s  Jack Reacher novels? To go from a female Medical Examiner who follows all of the rules to an ex-army man who is drifting across the country who breaks whatever rules he needs whenever he needs to. Both have a strong sense of right or wrong, both end up in life-threatening situations, but their different approaches lead to very different books.

In this first book in the series, Reacher ends up arrested in a tiny town in Georgia. He is casually looking for the story behind the death of a little-known jazz musician but stumbles into a conspiracy that is bigger than the whole town. It feels like it is a fast-paced book, but that is more because the action sequences of the book are graphic and fast; in-between are long, slow investigations. This is the thing that surprised me in the Jack Reacher film (starring the terribly miscast Tom Cruise) – I expected graphic violence and fast-paced everything, but it was actually mostly very slow-paced.

For me, I love this series. I like a good fast read to clear my brain between more intellectual or literary novels. That is certainly not a criticism; books are entertainment, and if we can’t enjoy them on a variety of levels, what’s the point? Incidentally, the critical reviews of Lee Child’s work are a lot more amusing than that of Cornwell. I think people are genuinely offended by Child’s character and stories. I love it.