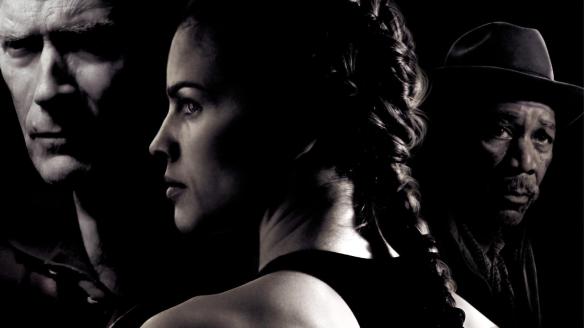 Maggie Fitzgerald (Hilary Swank) wants to be a boxer and she wants to be trained by Frankie Dunn (Clint Eastwood). Eddie Dupris (Morgan Freeman), an ex-boxer trained by Dunn who retired after a fight that cost him his eye and works in Dunn’s gym, sees her passion and helps her out, and eventually Dunn agrees to take her on as his first female boxer.

I don’t think I like Clint Eastwood. There, I’ve said it. There seem to be many things in the world that it, for whatever reason, is sacrilege to dislike. Why? I don’t know. He’s considered to be an American icon, but I’m not American, so why should it matter if I like him or not?

For me, this film was quite tedious. Dunn wouldn’t train Fitzgerald because he didn’t trust himself after what happened to Eddie. She wears him down. He trains her. *Spoiler Alert* Something bad happens to her. He can’t forgive himself. Blah blah blah. I know I was supposed to cry and feel all kinds of emotions; perhaps that was just it. Perhaps it the attempts to manipulate my emotions were just too blatant. I just didn’t like it.