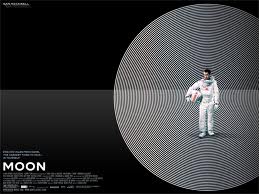 It’s the future, and there is some way that the moon powers Earth. I didn’t quite understand the ‘science’ of this concept, but was than happy to go along with the construct that Earth relies on Sam Bell (Sam Rockwell) a man on his own on the moon manning the various machines that keep the show on the road. Sam has only got a short amount of time before his stint is up, but things are suddenly becoming very difficult.

I loved this film. I had no idea where it was going, from one moment to the next. In fact, just as I felt that I knew what was happening, it went somewhere else. I’m very much used to seeing Sam Rockwell playing the crazy man-child who won’t grow up, but in this film, we really see his acting chops. He’s pretty darn good; and for a sci-fi (not my totally favourite genre) this is a pretty darn good flick.