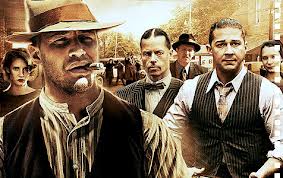 The Bondurant brothers are bootleggers working in rural Virginia, managing stills in the hills and running spirits into towns. Legend is that the brothers are indestructible, which seems likely during several of the particularly violent and gory scenes in this exceptionally violent and gory film. Things are going well for the Bondurant brothers, with young Jack (Shia LaBeouf) finally stepping up into the business. Then there is a new lawman in town – the ever-creepy Charlie Rakes (Guy Pearce) and things getting rapidly worse.

I am currently addicted to Boardwalk Empire and have been enjoying the Ken Burns documentary on the prohibition that’s been playing on SBS. It was great to see the other side of the prohibition, especially tied in with aspects of the depression. But it wasn’t the plot that made the film for me. It was the characters. In many ways, Jack was the weak link of the characters. I didn’t want him to get cocky. He spent his life not living up to his brothers, and I just wanted him to do what he needed to and not be an idiot. But, without him being an idiot, it would have been a different story. It just seemed a bit clichéd to have one character’s arrogance bring down the whole story. The annoyingness of Jack was by far outweighed by the other marvelous characters, most notably for me, Charlie Rakes. Guy Pearce looks incredibly creepy in this role, with his shaved parting and his foppish suits, but it was the coldness behind his camp behaviour that made him the evil character that he was. In direct contrast was Tom Hardy’s portrayal of Forrest Bondurant. Straight talking, when he talked. A man with no airs, no graces and certainly no bullshit. Yet he was the criminal that the audience sided with and loved.

Lawless looks into a time in the world where people were struggling and the line between legal and moral was blurred.  It’s a great yarn. Enjoy it.