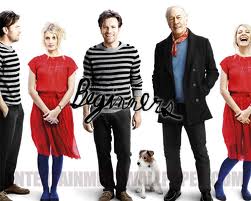 Beginners follows the life of Oliver (Ewan McGregor) as he deals with life and love after the death of his father, Hal (Christopher Plummer). Shortly after his mother’s death, his father came out as a gay man and embraced life in the gay community thoroughly before becoming ill and dying, and a lot of Oliver’s problems seem to tie in to a childhood within a marriage that was, in many ways, a platonic friendship. It is only when he meets Anna (Melanie Laurent) that Oliver is really able to recognise and address his problems with intimacy.

That previous paragraph took me many redrafts, and I’m still not happy with it. I don’t want to merely copy any other descriptions of the plot. I just think there is a lot more to Beginners than that summary covers. Mind you, it’s not as bad as the blurb on IMDB, which is totally crap.

Once I got used to McGregor’s American accent, I loved this film. I loved that it is chopped up all over the place, and that the audience is fed information piece by piece. I love that there is a strong sense of reality in it (given that it is largely biographical). The acting is almost flawless – my only complaint was the casting of Goran Visnjic as Hal’s love interest. It just seemed to me that he was playing a straight man acting like a stereotypical camp ditz, and maybe some people actually are like this, but it just felt awkward and took away from the rest of the film for me.

I loved the writing of the film – the structure and the humour and the emotions it stirred. I think some audience members will struggle with the bordering-on-quirky (alright, at times, downright quirky, but I think in a good way) female characters, but they weren’t too over the top for me. It is a good, romantic tale, and I loved it.