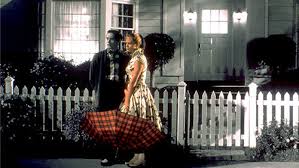 A brother and a sister in 1990s America. Jennifer is far more interested in boys and partying than schoolwork. David is a geek, unseen in his own way, and obsessed with a 1950s Leave it to Beaver type television show called Pleasantville. A little bit of magic and they end up in the world of Pleasantville; 1950s America, with all the hot apple pies, sodas, sexual stereotypes and racism that anyone could want.

I really like this film. There’s not much that you would not expect from this film; fighting injustices as people discover who they really are. I found it clever and entertaining the first time around, and I’ve watched it several times since and really enjoy pretty much everything about it.