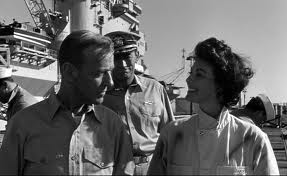 During my ‘end-of-the-world’ phase over the last few years, I’ve watched and read a variety of texts ranging from zombie apocalypse to chemical disaster and the like, and it really became quite depressing. On The Beach most certainly led to a feeling of despair, possibly because it is normal people with limited knowledge of what has happened simply waiting for the end.

The basic concept is that there was a sudden war in the northern hemisphere that led to several countries deploying large numbers of nuclear weapons. It is believed that everyone north of the equator is dead and that the radiation is creeping down. It is inevitable that everyone will die, and die a horrible death. That is the one certainty; they are not sure quite when. The story follows four main characters:  Australian naval officer Peter Holmes and his wife, Mary; American naval officer Dwight Towers; and Mary’s friend, Moira.

Dwight is with one of the last groups of Americans known to be alive, as their submarine was below the equator when the bombing began. Peter introduces Dwight to Moira, who is dealing with the situation by partying a lot. Her charms do not work on Dwight, who is living the delusion that he will return to his wife and children after this mission. Well, a delusion, but one that he is totally aware of; the one thing that can keep him functioning normally. Meanwhile, most people are living life as normally as possible. They still shop and work and go about their usual business. But there are some changes; there is much heavier drinking, and the local chemists are issued with suicide pills for each person to take when they chose – one way to avoid the horrible death from radiation poisoning. There is a Grand Prix organised, but it has the edge that the drivers no longer fear for their lives, and so are prepared to go to any length to win.

It is a challenging concept; some elements are extremely dated, but human nature seems to prevail. I do wonder, though, what would happen if the same scenario were to be considered in modern-day Australia.

The film is a fairly close approximation of the book, but with one key change. Romance. Dwight Towers and Moira explore the romance of those destined for death, and it does take some of the moral weight from the relationship. The book is most certainly worth reading, without a doubt; the film is also worth a watch, and is available on YouTube. I would have preferred it if there was a little less ‘Waltzing Matilda’ –  for me, the scene where Dwight and Moira go fishing is totally ruined by the song.  But it is just one part of an excellent, if somewhat depressing, tale.