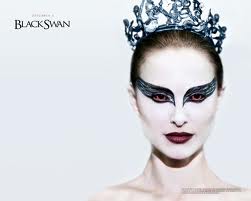 Nina is a very fragile young lady, a ballet dancer, extremely controlled by her mother, who scores the role of the Swan Queen in Swan Lake. She has no problem dancing the innocent role of the White Swan, but struggles to find the darkness and depth of the Black Swan.

I’m not great with scary movies. They scare me. Lots. I’m also not great with suspense and anything that involves sudden shocks and loud noises. However, much of this film is very slow-moving and dark in a documentary style, and so the shocking parts are that much more shocking. Some parts that are absolutely horrible; violent, sudden and unexpected. It seems an odd film choice for Best Film Oscar, though Natalie Portman is fabulous as the extremely meek and soft-spoken ballerina.