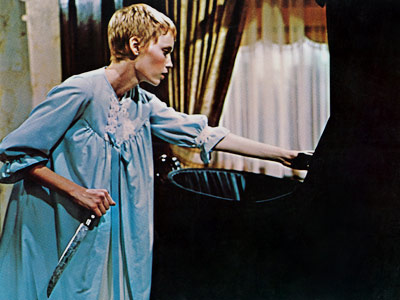 Rosemary (Mia Farrow) and her actor husband, Guy (John Cassavetes), have moved into a fabulous apartment in New York, in a building with a dubious history – a history of murder and child deaths and all kinds of horrible stuff. Both laugh it off, especially when they meet their neighbours. Minnie (Ruth Gordon) and Roman Castavet (Sidney Blackmer), an eccentric, elderly couple. Guy takes a real shine to them. Eventually, Guy agrees to father a child with Rosemary, though the conception involves drugging and a mysterious ritual that Rosemary is sure she must have dreamt. The pregnancy continues with heavy involvement of the neighbours, though Rosemary is increasingly suspicious of their motives.

I guess from the start, you know this is a horror film, but none the less, the idea of a husband happily admitting to raping his drugged wife because he didn’t want to miss out on baby making night is pretty creepy. Though is this less creepy than him admitting that the child was conceived with a whole lot of creepy naked old people singing ritual chants?

The age of the film does make it far less scary than it could have been; that and Mia Farrow’s appalling acting. Actually, most of the acting in the film is pretty appalling. And much of the direction. Why is this considered a classic? Indeed, is it considered a classic? Or is just the fact that it is often tied in with the horrific events that later took place with director Roman Polanski’s wife that is why it is such a famous film? Either way, I’m not sure it is worth it.

Rosemary’s Baby won Oscars for Best Actress in a Supporting Role (Ruth Gordon) and was nominated for Best Writing, Screenplay Based on Material from Another Medium (Roman Polanski)