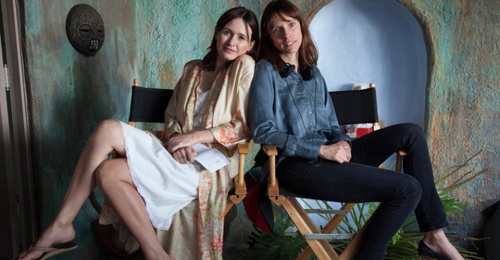 Emily Mortimer is a well-known and respected English actress, known for the HBO series The Newsroom as well as films such as Shutter Island, Hugo and Lars and the Real Girl. In this television series, shown as part of the Big Screen-Small Screen program of the festival, a fictionalised version of Mortimer is paired up with a fictionalised version of her best mate, Dolly. Dolly has broken up with her boyfriend and, in an attempt to get her back on track, Emily flies her to LA to be her assistant.

It’s a fun series; the set-up is immediately fraught as a power structure is introduced to their relationship. Neither seem to be at all aware of the effect that they are having, and both are too polite to consider saying anything directly to each other. Plus, not only do we get to enjoy Emily Mortimer, who I always enjoy, we get cameo appearances from Susan Sarandon, Chloe Sevigny, Andy Garcia, John Cusack.

Five episodes of Doll & Em screen in each session. The sessions are at 6:15pm on Friday August 1 at Hoyts and at 6:30pm on Monday August 4 at Kino. Book tickets at MIFF http://miff.com.au/program/search or call 9662 3722