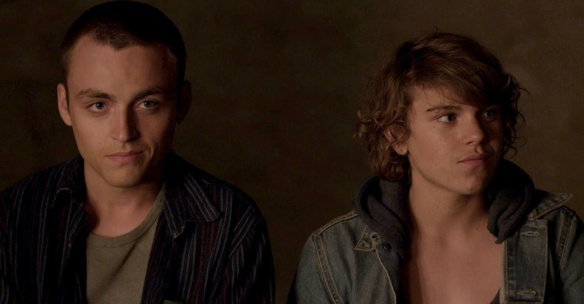 Sylvain (Zacharie Chasseriaud) lives a nomadic existence with his father Yves (Nicolas Bouchaud) and brother, Pierre (Jules Pelissier). But Pierre has enough and leaves them, and the others must hit the road again, assuming a new identity and hiding. After meeting and falling in love with Gilda, Sylvain is drawn to a different life, with stability and consistency.

La Belle Vie has beautiful pacing, very slowly revealing the story. Gradually we learn that they are on the run because Yves did not want to give up custody after a divorce, and it raises some very interesting questions; is a life of hiding, regardless of the joyful experiences that can be had in places such as the beautiful French countryside, be better than life at home? Was the father right in taking the children? What about the mother?

The end of this film is one of my favourite final scenes ever – so totally and utterly open-ended.

La Belle Vie is part of the Next Gen program and has screenings on Tuesday, August 5 at 11am and Thursday August 14 at 1:30pm at ACMI. Book through ATOM http://www.metromagazine.com.au/screenings.asp