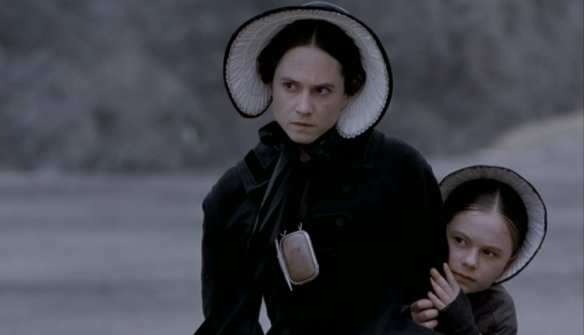 Ada McGrath (Holly Hunter), a woman who does not speak is married to a man she has not met and sent with her young daughter, Flora (Anna Paquin) to New Zealand, a country only just being colonised by the English. Her new husband, Alisadair Stewart (Sam Neill) is emotionally distant and has no idea of how to deal with a woman. But then she starts a relationship with George Baines (Harvey Keitel) which compromises her own security.

It is certainly a stunning film and I recall it being highly acclaimed at the time. I found it difficult to get past Harvey Keitel’s mysterious accent (I think Scottish?), though he had a lot of passion. But the love story is terrible – the idea that he has to blackmail her into sexual favours (although they are often quite tame, such as lifting her skirt to reveal a tiny hole in her stocking that he then fondles as she is playing the piano. Then, after resisting for some time, she falls in love? I mean, he was a potential escape from the brutal life Stewart had dragged her into, but it was actually extremely unpleasant to watch. Perhaps, if there has been some suggestion that Baines had feeling for her and it was not just a convenient way to bed a white woman, maybe then I’d have accepted it. As it was, it pretty much ruined the film for me, despite the beauty, it was a story about two creepy men dominating a woman. Oh and the piano music was horribly repetitive and drove me to despair.