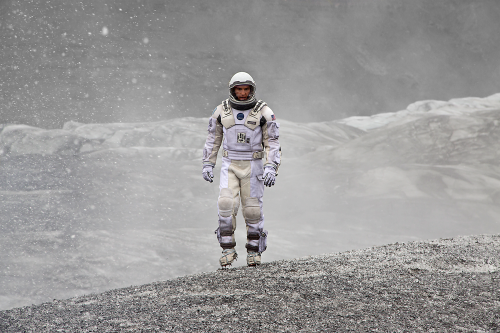 The world is dying. There is not much food and there is dust everywhere. Cooper (Matthew McConaughey) is a farmer, but was previously an astronaut. Now, with his father (or father-in-law, I can’t recall if that matters) Donald (John Lithgow), he is raising two children; Murph (Mackenzie Foy, then later Jessica Chastain and still later, Ellen Burtsyn) and Tom (Timothee Chalamet and then later Casey Affleck). Then he ends up stumbling across a NASA station or something and gets roped in to a mission to explore possible inhabitable planets through a wormhole. There is the Professor (Michael Caine), a fellow astronaut, Brand (Anne Hathaway) and later the nice surprise of Mann (Matt Damon. Didn’t know he was in this film!).

Yawn. I just couldn’t get into this film. I couldn’t car about the characters, I didn’t have any particular care about the planet dying. I think it is a really well made film, if about an hour too long (it’s just under three hours). The one standout thing was the soundtrack – amazing, really bringing forth the emotion without being overly annoying or overbearing.