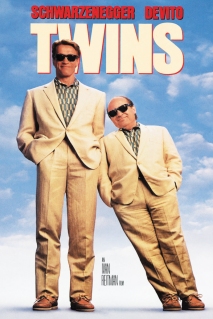 Julius (Arnold Schwarzenegger) is ‘the perfect man’ – a created by six scientist fathers (and no, I cannot quite figure out how that works scientifically) and a beautiful, artist mother (can we explain away the poor representations of women by it being the eighties, or being a fairly low quality film overall?). What he was never told, raised on a tropical island with a scientist who has him working on some research, was that there was another baby – a twin, with all the leftover bits. Vincent (Danny DeVito), the opposite of Julius; raised in an orphanage, stealing cars, cheating on his girlfriend and owing an awful lot of money. Julius finds Vincent and then they go to find the mother they both believed was dead.

It’s everything you expect it to be. A bit crap, but vaguely funny. Mostly funny. Lots and lots of sight gags – Julius is so big and Vincent is so small! Julius is so naïve and Vincent cons him lots! Oh, so funny! (Well, kind of). There is also a scene at the end where a man (Spoiler Alert!) is thwarted by being hit on the head with a block and tackle type thingy, and then a mega amount of chain falls on him. In this film, it’s kind of funny, but I’ve watched so many violent and awful films recently that all I could think of was what an incredibly horrific death it would be. IMDB has a sequel slated, with Eddie Murphy playing the third brother in a set of triplets. There is no way it can work in the logic of this film, but I really hope they make it work. I would totally pay to see that film.