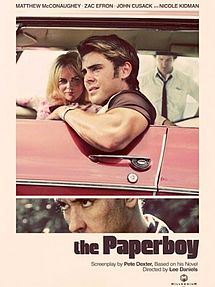 This is a tough film… it starts as a film about a couple of hopefuls who are trying to get a possibly innocent criminal out of jail and turns into… well, I don’t really know what. It’s all really tricky.

Zac Efron plays Jack, a young guy in Florida in the 1960s who is dragged into a strange world after his brother Ward (Matthew McConaughey) returns to town to try to expose injustices in relation to a murder conviction. The convicted is Hilary Van Wetter (John Cusack), a repulsive man from the swamps. Ward brings along his writing partner Yardley (David Oyelowo), who creates waves as he is a black man in this racist society, and Charlotte (Nicole Kidman), a racy woman who believes after corresponding with Van Wetter, that not only is he innocent, but that they are in love. Jack is in love with Charlotte in no time. And then things get really horrible. The whole story is told by the family maid, Anita (Macy Gray).