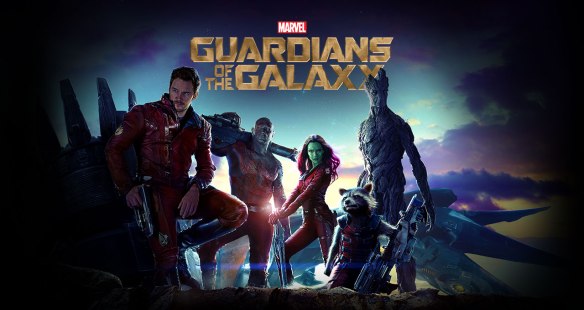 Peter Quill (Chris Pratt) was abducted from Earth as a small boy and as an adult travels the galaxy stealing stuff for money. Stealing an orb turns out to be a bad idea, as he ends up with some nasties after him, led by Gamora (Zoe Saldana). Rocket (voiced by Bradley Cooper) is a genetic creation – essentially a talking racoon and has a mate who is mostly tree, Groot (voiced by Vin Diesel) and they kidnap people for cash, and end up after Peter too. Things go bad, they end up in jail and then escape with one more hanger on – Drax (Dave Bautista). And they have to fight together to find freedom. And friendship.

And it is that corny, but it is also extremely funny and clever and not so cheesy, with loads of fights and cool crazy special effects and really bright coloured creatures, and Glenn Close and John C. Reilly and Benicio Del Toro and Peter Seranfinowicz and I think I may be a little too excited over this one so I am going to go lie down for a while.