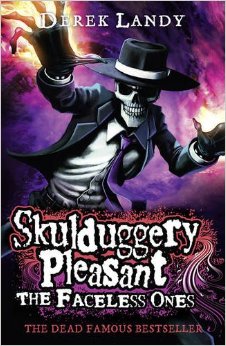 Just as we think that the fear of the world being ended by one bad guy is over, another bad guy appears to take over the world. Or end the world. Or both (if that is possible?) It seems as though these books could be slipping into a pattern. There are a group who trust Skulduggery and Valkyrie, and there are others, more powerful, or at least, in positions of power, who don’t. One side versus the other, with some spectacular battles and quite a few laughs.

What makes this stand out? Well, I really like the house (you’ll know it when you get there) and the Sea Hag is gloriously awful. There are a few new characters, and a lot of the same old ones (although I get really confused, because I keep thinking that characters are dead and then they turn up again. Or I get emotional because it seems likely that they will die, but magic happens! What really made this work for me was the end – when I got to the end of this book, I immediately needed to get my hands on the next book. That’s a good sign.