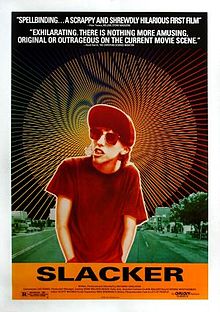 Richard Linklater likes to play with the form in his film making, and I really like it. From the recent Boyhood, filmed over eight years, to the Before series(Before Sunrise, Before Sunset, Before Midnight), he’s tried a few different things.

Slacker is one of his really early films. Set around a student area of Austin, Texas, it show vignettes of things happening – or often of things not happening. People talk, people flirt. Strange stuff, extremely mundane stuff. It’s way dated, but charming because it is. Fabulous.