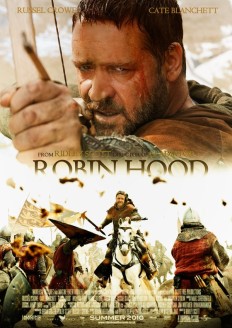 I remember when this film came out, everyone was going on about how terrible Russell Crowes’ accent was, and I just want to say that it didn’t bother me. There were accents all over the shop, I had no idea who was supposed to be from where, and didn’t really care.

The film tells the story from when Robin Longstride (Russell Crowe) and his mates are fighting under King Richard the Lionheart in France, only when the king dies, they nick off home, pretending to be some nobles whose they find dying along the way. After delivering the news to the new king, Robin goes to tell the noble’s father that his son is dead. The father, Sir Walter Loxley (Max von Sydow) convinced Robin to stay and assume his son’s identity to ensure that the land is not taken away from the widow, Marion (Cate Blanchett). And the story continues up to the point where Robin and his mates become outlaws.

In general, I didn’t mind this movie. It’s wasn’t amazing, and personally if I was to watch a film about a rebel in the olden days in Britain, I’d sooner watch Rob Roy or even Braveheart. What really bugged me was that Cate Blanchett had a very average role to play, and there was absolutely no chemistry between her Marion and Crowe’s Robin. It felt like it was close to being a good story but never quite made it.