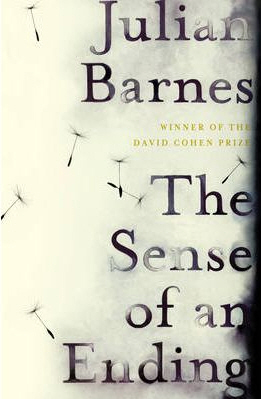 Tony Webster is a retired man reflecting on his life. As a youth, he and his school friends had grand and romantic dreams of love and life and the world. But his life did not unfold that way – what he hoped would be a wild romance at university was a disaster, and with his ex dating a friend, Tony married and had a child. Then, there is a suicide that Tony could never explain in a satisfactory manner, but he has written all of this from his past away until he receives a sum of money and some documents in the will of the mother of the ex from university and Tony is left to contemplate what he thought was true and try to figure out if his conclusions were correct or not.

I really enjoyed this book. I love that this man who thought he had life sorted out, who knew that his life was not perfect but thought he understood exactly how and why he was where he was in life suddenly has all of that challenged. He needs to re-evaluate, to take what he always thought were givens and study them again. It didn’t help that the ex, Veronica, is an extremely annoying character, but as we have such an unreliable narrator, we are only seeing her through his eyes.

The Sense of an Ending won the Man Booker prize in 2011.