The Reluctant Fundamentalist by Mohsin Hamid

A Pakistani man, Changez, lives in America, works in the financial sector and is doing really well for himself. He loves an American women, but she has a lot of mental health issues, and the September 11 attacks happen and suddenly he is being treated differently. How can he cope?

I had no expectations going in to reading this book. It was a text for the Year Twelve students at my school, and many of them hated it. I was surprised to find that it was more of a love story, or a love gone wrong story, than anything else. What to do when love is so hard, and you cannot fully understand the one you love. And then throw in the turmoil of suddenly being seen as a potential terrorist, and questioning your place in the world.

The story has the protagonist telling his story to an American in a Lahore café, with the American depicted as weary and nervous, with little clarity as to his role in the piece. 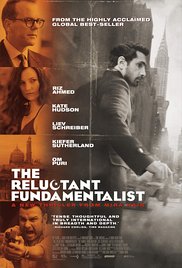 It is essentially the same story as outlined above, although there is a lot more emphasis placed on the meeting between Changez (Riz Ahmed) and the American, Bobby Lincoln (Liev Schreiber). I felt that the original book had been far more about the failed love affair, but the film focuses on Changez his career and how this is effected by September 11.

It’s a good film, I suppose, but it doesn’t have the heart of the book. Plus, it is told far more from an American point of view, and that takes something else away. I guess the question often with adaptations is whether is keeps to the spirit of the original or if it stands totally alone as an artwork. For me, this has lost the spirit of the original text and is not strong enough to stand alone.