Me Before You by Jojo Moyes – Book Review

Lou Clark is a bit odd, a bit quirky and a bit useless. She’s stuck in a relationship with a guy she doesn’t really like that much, living at home and the café where she’s been working for several years has just closed. Her family is barely coping financially and so Lou is forced to take and remain in a caring job – being a companion for the grumpy and rude Will Traynor – ex high-flying CEO who is now paraplegic after a car accident.

I knew that this was going to be a tear-jerker. I also suspected that it might be somewhat offensive, in that there is a huge issue with representing disabled people as preferring to be dead than disabled. However I felt that Moyes represented things well in this book. It was clear that this is how this character feels, and clear that many other disabled people do not feel this way. I thought it was very clever the way it represented the way many able-bodied people treat people with disabilities – embarrassment, condescension, confusion, even anger. And I like that it might make people think about how they treat people around them. 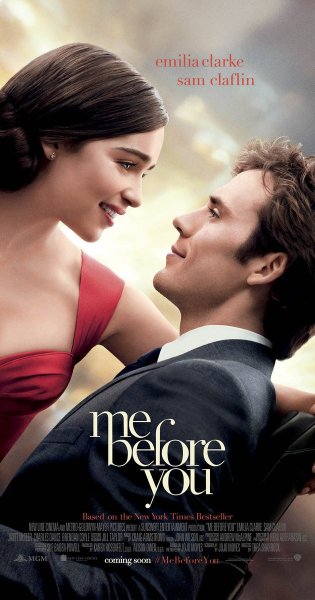 The story is the same – quirky girl meets depressed and recently disabled man and they find a connection. And it was great – great in exactly the way the book was. Of course, it didn’t get into the depths of the book, and having read the book, I was slightly disappointed that some of the back story and motivation was missing, but I think had I seen the film first, I wouldn’t have missed it. But one thing I have to get out of the way – it was Khaleesi! I was stuck on who the actress was playing Lou, and was stunned to learn that it is Emilia Clarke who is also Khaleesi in Game of Thrones – such extremely different characters! My only real complaint was that I didn’t feel much chemistry between the two of them, which I think was really needed.