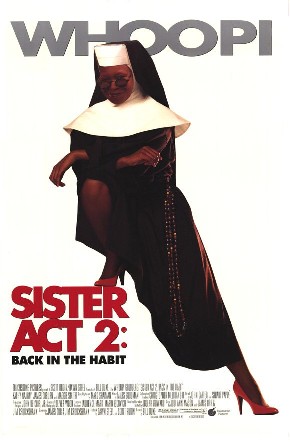 After her time in hiding in the convent in Sister Act, Deloris (Whoopi Goldberg) has hit the stage as a headlining act in Vegas when the sisters come to ask for her help. They have been assigned to teach at a rough school in San Francisco and need her to come, teach music and get the kids in line. Of course, she goes, and before you know it, she’s whipped the music class into a choir and they’re out to prove themselves to the world.

This is a really good, fun film. Sure, there are some parts of the plot that are a touch weak, and I love films that are set in rough schools yet all the teacher needs to do is raise their voice slightly and they have them all in their seats and listening (rough? Hmm… in my experience, that’s quite polite), but ignore that. What you want to watch are the characters. Of course, we have Delores and the wonderful nuns from the first film (including the wonderful Maggie Smith and fabulous Kathy Najimy) but then there are the kids; Lauren Hill obviously stands out, but whether we know their names, they are a great little ensemble. Sister Act 2 is a classic film of the early nineties and it rates as one of the top comedy sequels – I found I liked it a lot more than the first one.