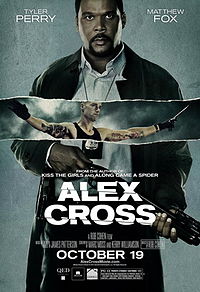 Alex Cross (Tyler Perry) is a psychologist who currently works for the police as a detective. Picasso (Matthew Fox) is a serial killer who enjoys torturing his victims to death. Cross investigates Picasso with his partner, Thomas (Edward Burns) despite a lack of support from his boss, Captain Brookwell (John C. McGinley in a ridiculously not funny role). And things get nasty.

The Alex Cross series of books were written by James Patterson, and while the character is clearly based on that of the book, this doean’t seem to be Patterson’s work.Essemially, this is the Alex Cross origin story. And it is pretty darn awful. The script is a bit cheesy and has some good shoot up bits, but the directing, the acting, even the make-up and special effects are all awful. I’ve not seen either of the films based on this series and can only suggest that if you want to see Alex Cross brought to life, go for one of those. Avoid this one like the plague!