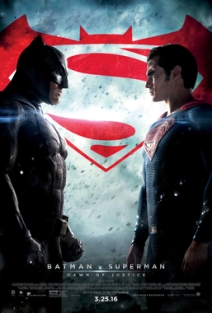 The world of Metropolis is reeling from Superman’s battle against the bad guys in the last Superman film. Batman’s not happy with this and wants to stop Superman, and they’re unaware being controlled by the new and evil Lex Luthor. And then there is Wonder Woman?

Ok, I got really lost. I wasn’t sure what world we were in… was it after the Christopher Nolan Dark Knight films? No. But it was after the recent Superman? Yes. So, Superman lives in Metropolis? Yes. And Batman lives in Gotham? Yes. So, they are nearby? Apparently. How does Wonder Woman fit in? I’m still a little confused on that one.

I enjoyed the fighting and stuff. And I quite like Henry Cavill as Superman, and Amy Adams as Lois. Jesse Eisenberg was great as Lex Luthor – I think he was the highlight of the film for me. Ben Affleck as Batman? No, he didn’t work for me. Perhaps I could have enjoyed this more in a cinema, perhaps I would have followed the whole thing a lot better, but as it was I felt like it was a totally confusing mess.