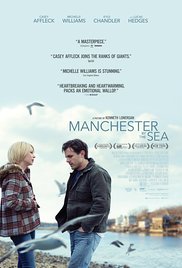 Lee Chandler (Casey Affleck) is a loser, living a life in a small town that involves being a half-arsed handyman and getting into bar fights. Then his brother Joe (Kyle Chandler) dies and he has to try to pull himself together because his brother has left Lee as guardian of teenager Patrick (Lucas Hedges). Then, it is revealed that Lee drunkenly put a log on the fire in his house while his wife and two or three children slept, then went out. When he came back, the log had rolled off the fire and his house was burnt down, with his children in it. His wife, Randi (Michelle Williams) survived, but their relationship didn’t. He was cleared of fault, but has never got over the guilt.

I really disliked this film. It was told through a series of flashbacks that were so unclear that it took time to figure out what was current and what was in the past – so much so that while I thought Joe was dead, the next thing he was on-screen and I was confused. I didn’t like any of the characters. Yes, I felt terrible when Lee returned to the house to find the tragedy, but not enough to care about what happened to him. I found little to appreciate in the film, but clearly I’m not speaking for everyone because it was nominated for loads of awards and even won some. Oh, dear, Casey Affleck won Best Actor? Well, there you go.