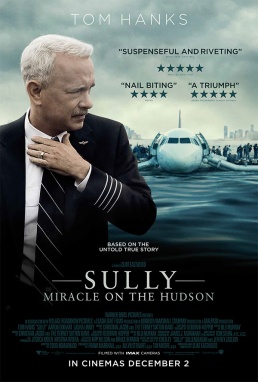 In 2009, pilot Chelsey Sullenberger made an emergency landing of a plane onto the Hudson River in New York and every person on the plane survived. The investigation that followed suggested that he made a bad decision and could have still saved everyone in a far less flashy manner. This film follows the investigation, showing the emergency landing and everything leading up to it in flashback. It’s big and cheesy and Sully is the American hero against adversity. Big government vs the little guy. One guy against the world. A real Clint Eastwood story.

I’ve not been a huge fan of Eastwood’s directing, and this could have been the one that I got into, except for the film Flight just a few years ago. Similar story, only that was fiction. I didn’t really love that one either – although the crash scene was most spectacular. None the less, I got quite irate watching this, thinking how dare they try to prove Sully and his co-pilot wrong when they did such an amazing job? Yeah, one man against the world!

Sully was nominated for an Oscar for Best Achievement in Sound Editing.