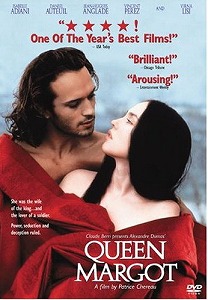 It’s France in 1572. The royal family is catholic, but the protestants are rising up. To try to broker peace, Princess Margot (Isabelle Adjani) is married to Henri de Navarre (Daniel Auteuil), but then thousands of protestants who’d come to Paris are massacred. This film covers that and then a series of events afterwards.

It’s quite beautiful, spectacular costumes. I got a little confused about who was who as there was a very large cast, mostly white men with brown hair who all looked pretty similar. It’s mostly an extremely good film, but with moments that are totally appalling which really ruined it. But it seems like this is a fabulous story, especially as a very brief bit of research has shown that there seem to have been a whole heap of rumours spread around about Margot and everything to do with her. This has to be a mini-series… well, there is a novel by Alexander Dumas, so that’s a good start. There doesn’t appear to be a series… yet.