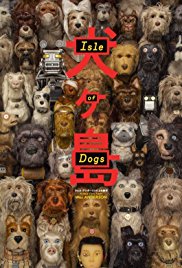 In a fictional future Japan, a cat loving dictator exiles all dogs to an island. One young boy goes on a mission to save his dog.

I really wanted to like this film. It’s beautiful and sweet and the animation is adorable, and I’m a bit of a Wes Anderson fan. But. So many problems. There’s a bit of cultural issues (my key one being the one non-dog and non-Japanese character – felt a bit “Thank god there’s an American to save the day”). Then there are the female characters. On the surface, there almost seem to be a couple of semi-decent females, just don’t look too close. Especially at the dogs. Apparently, female dogs are small breeds with pretty hair, whereas male dogs are big and strong. Perhaps someone needs to tell Wes that dogs don’t work that way. I just wish films would do better.