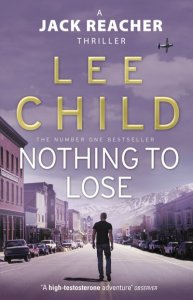 Reacher has ended up in Hope but is on his way to Despair. Yup, they are two neighbouring towns in the middle of nowhere. Hope seems to be ok, but Despair is terrible. When Reacher is literally driven out of town, he takes it personally and decides to investigate with the help of an attractive policewoman and a lot of patience.

While I have often stated my love for Jack Reacher books, this one isn’t my favourite. It’s fine, it does its job with the violence and brooding and sex and conspiracy and everything, but I kind of didn’t really care as much. I’m not saying that I didn’t enjoy it because I did. It’s more that I just didn’t love it.